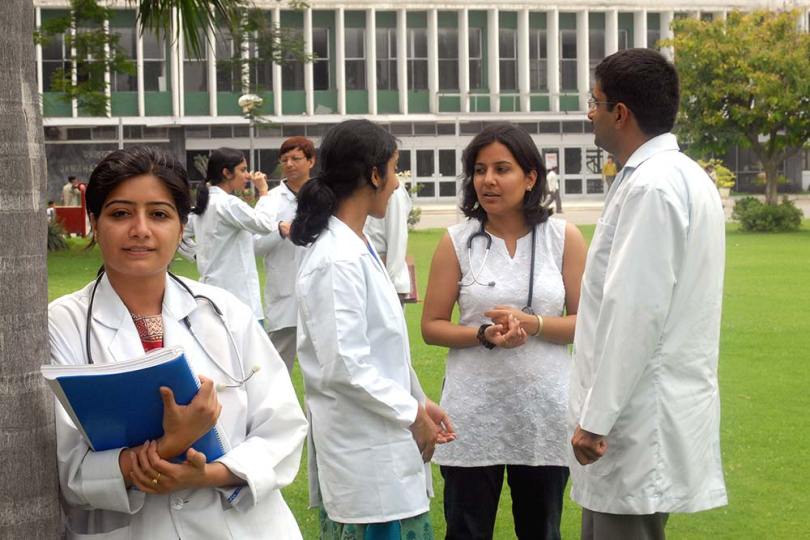 Medical colleges in India are ranked among the best medical schools in the world. This explains why many students prefer to get their medical degree in India. Apart from this, the cost of getting a medical degree in India is very low compared to countries like US, UK etc. In this article we are going to consider the top best ranked medical colleges in India.

Let’s now consider some of the top medical colleges in India with very affordable tuition fees for international students.

T M A Pai founded Kasturba Medical College, Manipal, and Kasturba Medical College, Mangalore, as a pair of private medical colleges in coastal Karnataka in 1953. The colleges began as a single unit and later split into two colleges, each with its own teaching hospital. KMC was India’s first self-supporting medical college. KMC has graduated students from more than 50 nations, and its degrees are recognized all around the world. The institutions are part of Manipal Academy of Higher Education, a prestigious institution.

In the QS World University Rankings 2021, Manipal Academy of Higher Education was placed 351-400 in Medicine, third in India behind AIIMS, New Delhi, and PGIMER, Chandigarh.

St. John’s Medical College is a Bangalore-based private medical school and hospital. It is part of the Catholic Bishops’ Conference of India’s St. John’s National Academy of Health Sciences. It was founded in 1963. Based on a national entrance exam, the college accepts 150 students for the MBBS undergraduate program each year. It also admits 100 postgraduate students (80 MDs and 20 Diplomas) to various medical specializations. Autumn Muse, a college cultural festival, is one of the oldest in South India.

In 2018, St. John’s Medical College collaborated with Apple to undertake a needs assessment of supplier employees’ health and well-being. Apple created and implemented a training curriculum based on evaluation findings to improve health awareness in critical areas. St. John’s also supplied nutrition advice, which resulted in improvements at a number of supplier cafeterias.

The college offers a four-and-a-half-year M.B.B.S. program which includes a one-year mandatory rotating internship. There are 150 seats available, and they are filled through the NEET test.

The All India Institutes of Medical Sciences (AIIMS) are a collection of independent government-run public medical universities in India that are governed by the Ministry of Health and Family Welfare. An Act of Parliament designated these institutes as Institutes of National Importance. The precursor institute, AIIMS New Delhi, was founded in 1956. 22 more institutes have been declared since then. There are fifteen institutes active as of January 2020, with eight more slated to open by 2025. Six more AIIMS have been proposed.

The AIIMS (New Delhi) was founded as a super-specialty tertiary care center with a strong focus on research and specialist training. The basic medical course at the bachelor’s degree level is known as MBBS. Following that, master’s degree specialization in general surgery, general internal medicine, pediatrics, and other subjects is available.

Cardiothoracic and vascular surgery, rheumatology, neurology, and pediatric neurology are examples of superspecialties in which practitioners require specialized certification after finishing their postgraduate education. At AIIMS (New Delhi), there are at least 45 superspecialties at the higher master’s degree level. AIIMS also provides research courses at the master’s and doctoral levels.

Today MSRMC is ranked 27th among medical colleges in India, and Outlook India ranked it 21st in 2019.

Armed Forces Medical College is India’s leading medical institute, recognized for its educational and research prowess. Undergraduate and postgraduate medical and nursing students are trained at the college, with guaranteed employment opportunities in the defense services.

The institute was established on May 1, 1948, as a result of the BC Roy Committee’s recommendations and the unification of several defense medical organizations. The AFMC’s “Graduate Wing” was created on August 4, 1962, to ensure a consistent supply of medical officers for the Indian Armed Forces. The institute is currently connected with the Maharashtra University of Health Sciences and is accredited by the Medical Council of India to offer undergraduate and postgraduate medical degrees.

KPC Medical College and Hospital was West Bengal’s first private-public-partnership (PPP) medical school. Kumud Shankar Ray founded it in the premises of Dr. K. S. Ray TB Hospital, which was founded by Dr. K. S. Ray himself. Kumud Shankar Ray (1892–1950) was a pioneer in tuberculosis treatment, chest medicine, thoracic surgery, gland grafting, and radium therapy, among other fields. He was also a founding member of organizations and institutions such as the Indian Medical Association, the Medical Council of India, the Journal of the IMA, the S B Dey TB Sanatorium (Kurseong), National Medical College, and the Jadavpur TB hospital.

All of this is part of India’s medical history as well as the country’s fight against colonialism. He founded the mosquito control department as an Alderman and served as the head whip of the Swarajya Party and a subordinate of Deshbandhu C R Das. He assisted in the foundation of the Anthropology Department at Calcutta University as a fellow.

It is South Asia’s first and only specialized tuberculosis hospital, which Mahatma Gandhi visited for the last time on August 26, 1947. Subhas Chandra Bose and Jawaharlal Nehru were also frequent visitors to the hospital. Set up as a four-bed sanatorium in 1922 by a pioneering thoracic surgeon, it grew to a 750-bed facility with funds donated by a landed aristocrat named Provash Ghosh, who died of the disease and left his entire fortune of INR160000 (US$2,500) to Ray to purchase the 65-acre site and establish the hospital.

In 1977, the hospital was purchased by the Left Front government through an act. Sukanta Bhattacharya, a young poet from Calcutta, died of tuberculosis at the Jadavpur T. B. Hospital (later, K. S. Roy T. B. Hospital).

MAMC is a medical college in New Delhi, India, that is connected with the University of Delhi and managed by the Delhi government. It is named after Maulana Abul Kalam Azad, an Indian freedom warrior and the country’s first education minister. It was founded in 1959 on Bahadur Shah Zafar Marg, close to the Delhi Gate.

Four MAMC-affiliated hospitals have a total bed capacity of 2800 beds and serve millions of people in Delhi and the adjacent states in north India. The college is a tertiary care referral center with graduate and postgraduate degree programs, as well as residency and subspecialties/fellowships (referred to as superspecialities in India).

The medical college offers MBBS, BDS[Bachelor of Dental Surgery], MD, and MS degrees, as well as postgraduate residency programs for MCh and DM super-specialty and sub-specialty fellowship degrees. The college is also home to institutes that offer nursing and pharmacy degrees. In MAMC’s Medical Stream, there are over 30 courses to choose from.

A companion institute within the camps, the Govind Ballabh Pant Institute of Postgraduate Medical Education and Research, offers training in super specialities and basic disciplines. MAMC offers post-doctoral courses in pediatric surgery and neonatology. GB Pant Hospital offers post-doctoral courses in a variety of areas, including GI surgery, cardiology, and others.

These medical colleges in India offer qualitative education at a reduced price as you can see in this article. If you are on low budget and want to achieve your dream of studying MBBS abroad, then think of studying in India.