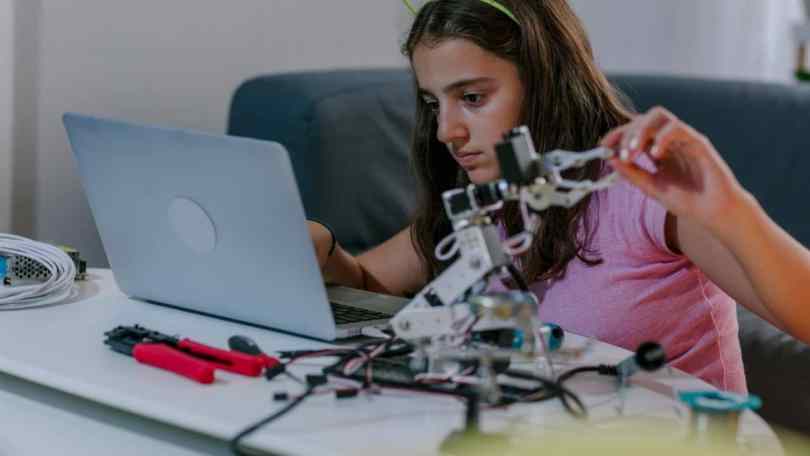 If you are planning to study Robotics but don’t know where the program is offered, never worry, as we are going to provide you with a list of the top 10 Robotics schools that offer qualitative education and their certificate is recognized globally. Before we consider the robotics schools, let’s look at what Robotics is all about.

Robotics is a field that combines science, engineering, and technology to create devices called robots that do (or mimic) human tasks. Robots have long been a source of fascination in popular culture. These exaggerated, humanoid robot concepts often appear to be caricatures of the real thing…or are they more foresighted than we realize? Robots are gaining cognitive and mechanical abilities that do not rule out the potential of an R2-D2-like machine in the future.

What Is a Robot?

A robot is a programmable machine that can assist humans or duplicate their operations. Robots were designed to perform repetitive activities (such as making vehicles on an assembly line), but they have since evolved to accomplish duties such as fighting fires, cleaning houses, and aiding with extremely complex procedures. Each robot has a different amount of autonomy, ranging from fully-autonomous bots that complete tasks without any external influences to human-controlled bots that carry out activities under full human direction.

Let us now consider some of the top Robotics Schools that you can learn Robotics….

Here are the top 10 Robotics Schools that offer high quality education in the field of Robotics and other programs:

Carnegie Mellon University is a private research university in Pittsburgh that is the fourth largest in terms of student enrollment. Essentially, the institution is the country’s premier robotics university. Above all, Carnegie Mellon has been a leader in robotics since the Robotics Institute opened in 1979. They also provide possibilities for a robotics degree as a second degree, master’s degree, or doctoral program.
Graduates of the program can work in research for companies like NASA or Google, or continue their education in a doctoral program.

Most significantly, students obtain a comprehensive understanding of the discipline of robotics while also choosing a concentration area. Haptic, human-robot interactions, and machine learning are some of the options available.

The Massachusetts Institute of Technology (MIT) is a private research institution that was founded in 1861. Although MIT does not provide a distinct robotics focus, it does provide students with two options for specializing in the topic.
In addition, MIT provides first-year robotics seminars, such as “Men in Manus: Building on the Core of Science” in Course 6 (EECS).

The University of Pennsylvania, or “Penn,” was founded in 1740 and was the first university in the United States to provide graduate and undergraduate programs. Officially, the university was one of nine that got a letter from the British before the American Revolution.

Above all, the University of Pennsylvania’s Faculty of Engineering and Applied Sciences has a general laboratory of robotics, automation, detection, and perception (GRASP). Beginning in 1979, the organization was one of the first to embrace the concept of robots.

Penn claims to be a pioneer in the concept of multidisciplinary robotics research, with professors of electrical and systems engineering, computer science, and information sciences making up the solid foundation. Mechanical and applied mechanical engineering, as well as medical school, are available.

This study takes place on campus, at partner universities, at research facilities around the world, and even in space. The Michigan Robotics Center is a new state-of-the-art facility where the next generation of robots will be developed under one roof.

The University of Michigan’s Institute of Robotics provides master’s and doctoral degrees in robotics. They also want to develop robotic applications by combining knowledge from many fields of research.

The Georgia Institute of Technology, also known as Georgia Tech, is a public university that was founded in 1885 and presently boasts a student population of about 30,000 individuals.

The Institute of Robotics and Intelligent Machines is run by Georgia Tech. Essentially, the Institute serves as a hub for persons who are interested in robotics and study a variety of fields. The Institute gains additional strengths as a result of the joint venture, as interdisciplinary people come together to address problems with maximum collaboration and innovation. Above all, Georgia Tech provides a robotics degree, a robotics doctorate that may be used to a variety of fields, and an undergraduate summer program for disadvantaged minorities. There is also a health robotics internship program at the institution.

Over 16,000 students attend Stanford University. In 1885, Leland and Jane Stanford established Stanford University in honor of their only child, Leland Stanford Junior. Students interested in robotics can look into the Faculty of Engineering’s graduate program among Stanford’s postgraduate options. Basically, concentrating in robotics research through mechanical or computer engineering in the field of artificial intelligence research.

Nine university departments are managed by the Foundation School of Engineering and Applied Sciences. Each of these departments offers a unique set of bachelor’s, master’s, and doctorate degrees in robotics.

There is no specialized robotics program for university students at the university. However, the University covers a significant amount of robotics equipment in the engineering and computer science departments.

Cornell University robotics students can learn about numerous aspects of robotics. Perception, learning, control, and human-robot interaction are all covered. For research and learning, the team employs a number of robots. Aerial robots, humanoids, workplace and home help robots, and autonomous autos are just a few examples.

An introduction to computer science utilizing robots, intellectual physical systems, and robot bases are just a few of the important introductory robotics courses offered at the University. However, autonomous mobile robots and human-robot interaction are among the intermediate and advanced courses. In addition to robotics principles, computer vision, and machine learning for intelligent systems are covered.

Is Robotics a good career?

Robotics engineering is regarded as a high-end professional vocation. Robotic engineers are in high demand in the gaming industry as well as in manufacturing facilities. If a candidate has a strong track record, they may be considered for key positions in research institutions such as ISRO and NASA.

What are the popular languages in Robotics?

C/C++ (an object-oriented successor to the C language) is perhaps the most common language in robotics. Python is also quite popular since it can be used to construct ROS packages and is utilized in machine learning.

Is Robotics difficult to learn?

The field of robots is as challenging as it gets. Learning robotics should be simple even in one’s adult years if you have a desire to conquer the unfamiliar and difficult task or challenges.

What’s the salary of a Robotic Engineer?

What are the different types of robots?

Cartesian, Cylindrical, SCARA, 6-Axis, and Delta are the five types of robotics that can be defined more simply and comprehensively. Each type of industrial robot has characteristics that make it best suited for various purposes. Their speed, size, and workspace are the key differences between them.