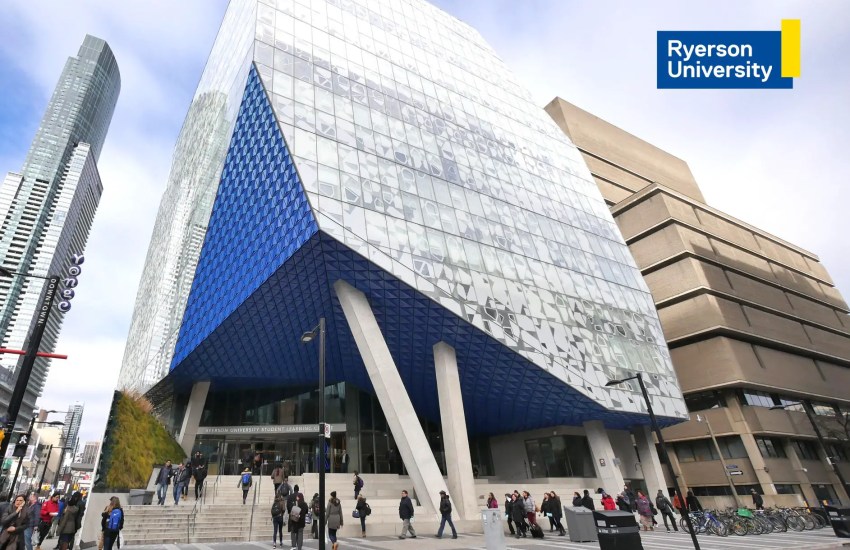 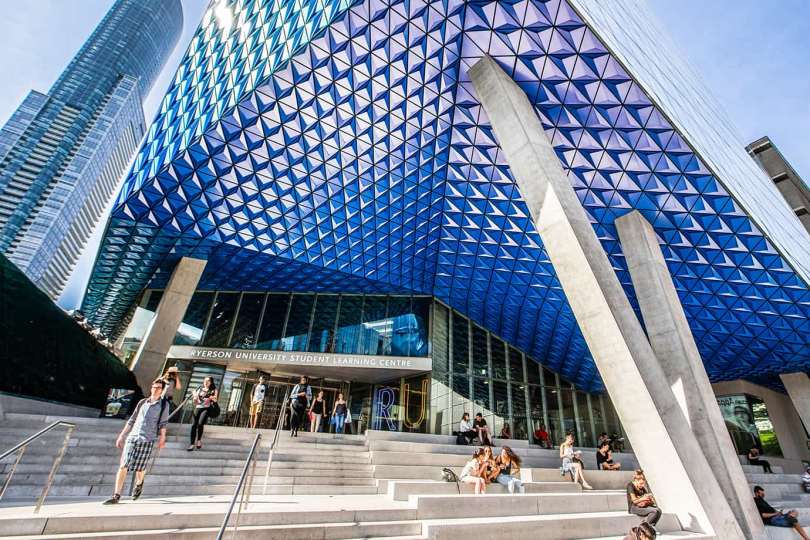 Ryerson University  is a public research university which is located in Toronto, Ontario, Canada. The university’s main campus is in the Garden District, but it also has buildings in other parts of downtown Toronto. The Faculty of Communication and Design, faculty of arts, Faculty of Engineering and Architectural Science, Faculty of community services, Faculty of Science, Lincoln Alexander School of Law, and Ted Rogers School of Management are among the university’s seven academic divisions/faculties. Several of these faculties are divided into smaller departments and schools.

Ryerson University acceptance rate is 80%, which means 8 out of 10 people that apply for admission are accepted. Most Ryerson programs/schools push students to achieve a 70 percent or greater average in six OACs, or equivalent, and include the required subject prerequisite in these averages. Most Ryerson programs/schools encourage 70 percent or above in a minimum of six Grade 12 U or U/C credits if graduating under the new curriculum, which began in 2003, and include the mandatory subject prerequisite within these averages.

Applicants from countries where English is not the first language, or where English is an official language but not the first language, must demonstrate that they have a suitable level of English competence. Academic and, when applicable, non-academic considerations, such as auditions, entrance essays, interviews, and portfolios, will be used to determine admission eligibility. The OSSD is the minimum requirement for the Diploma of Arts Program and the pre-University Studies option.

Ryerson University accepts online admission application. If you want to study in Ryerson university, the first step is to go through the university’s homepage and search for your program and after finding one, check the requirements. Once you have known your program’s requirements, gather all required documents and start your online application. The university will review your application and if it meets the minimum entry requirement, an offer letter will be issued to you.

Aside Ryerson University, there are other good universities in Canada with good ranking, you should also consider and we’re going to talk about a few of them here:

The University of Toronto is a public research institution which is located on the grounds of Queen’s Park in Toronto, Ontario, Canada. It was founded as King’s College by royal charter in 1827, making it Upper Canada’s first institution of higher study. The university was originally controlled by the Church of England, but when it became a secular institution in 1850, it took on its current name. As a collegiate university, it’s made up of eleven colleges, each with significant financial and institutional autonomy and distinct personalities and histories. In addition, the institution has two suburban campuses in Scarborough and Mississauga.

Over 700 undergraduate and graduate programs are available at the University of Toronto. The university consistently ranks among the top 10 public universities in the world and as the country’s top university in all major rankings. It is one of only two non-US members of the Association of American Universities, the other being McGill University. It receives the highest annual scientific research money and endowment of any Canadian university.

Three Governors General of Canada, five Prime Ministers of Canada, nine foreign leaders, and seventeen Supreme Court justices are among the University of Toronto’s graduates. As of March 2019, the university had twelve Nobel laureates, six Turing Award winners, 94 Rhodes Scholars, and one Fields Medalist among its ranks.

McGill has the highest average entrance grades of any Canadian university and provides degrees and certificates in over 300 fields of study. The five largest faculties, Arts, Science, Medicine, Education, Engineering, and Management, enroll the majority of students. McGill’s student body is the most internationally diversified of any medical-doctoral research university in the country, with 32.2 percent of international students coming from over 150 countries.

Furthermore, approximately 41% of students were born outside of Canada. Major educational journals consistently place McGill among the world’s finest institutions, and it has topped the annual Maclean’s Canadian University Rankings for medical-doctoral universities for the past 16 years.

The University of Alberta, usually known as U of A or UAlberta, is a Canadian public research university based in Edmonton. Alexander Cameron Rutherford, the first premier of Alberta, and Henry Marshall Tory, the university’s first president, founded the institution in the year 1908. The institution is a “comprehensive academic and research university” (CARU), which means it offers a wide range of academic and professional programs leading to undergraduate and graduate degrees.

Four campuses are located in Edmonton, as well as an Augustana Campus in Camrose and a staff center in downtown Calgary. On the south rim of the North Saskatchewan River valley, immediately across from downtown Edmonton, the old north campus comprises of 150 buildings across 50 city blocks. There are 400 programs across 18 faculties. About 39,000 students come from Canada while others come from 150 other countries in  the world.

In the city  of Alberta, the university is a key economic driver. Its yearly economic impact on Alberta is projected to be $12.3 billion, or 5% of the province’s gross domestic product.

McMaster University (McMaster or Mac) is a Canadian public research university in Hamilton. The main McMaster campus is situated on 121 hectares (300 acres) of property close to the Royal Botanical Gardens, near the residential areas of Ainslie Wood and Westdale. The DeGroote School of Business, Engineering, Health Sciences, Humanities, Social Science, and Science is one of its six academic faculties. It is part of the U15, a network of Canadian research-intensive universities.

Over 27,000 undergraduate and 4,000 graduate students attend McMaster University. Alumni and former students can be found all around Canada and in 139 different countries. Its sporting teams compete in U Sports and are known as the Marauders. Government figures, professors, business leaders, Rhodes Scholars, Gates Cambridge Scholars, and Nobel laureates are among the notable graduates.

Hope you enjoyed reading this article on Ryerson University acceptance rate. If you want to get more information about the university and it’s study programs, we advise that you contact them by visiting the schools homepage.