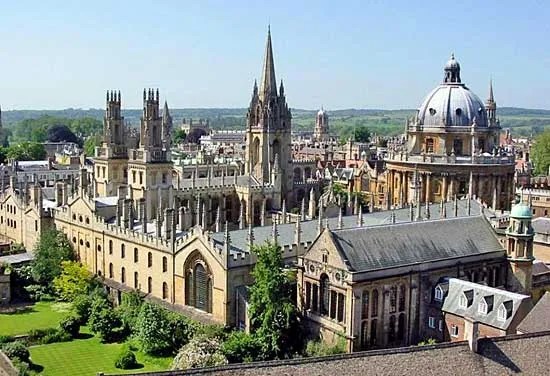 The University of Oxford is an English college research university. It is the oldest university in the English-speaking world and the world’s second-oldest institution in continuous operation, with evidence of teaching dating back to 1096. It flourished quickly when Henry II forbade English scholars from entering the University of Paris in 1167.

Following a conflict between students and Oxford townfolk in 1209, some scholars fled to Cambridge, where they founded the University of Cambridge. The two historic English universities are referred to as Oxbridge because they have many similarities.

The university is divided into four divisions and consists of 39 semi-autonomous component colleges, six permanent private halls, and a variety of academic departments. Within the university, all of the colleges are self-governing institutions, each with its own membership, internal organization, and activities. Every student is a part of a college.

It lacks a central campus, and its buildings and facilities are dispersed around the city. Lectures, small-group tutorials at the colleges and halls, seminars, laboratory work, and occasionally additional tutorials provided by the central university faculties and departments make up undergraduate education at Oxford. Postgraduate education is mostly delivered at the university level.

The university of Oxford has an acceptance rate of 17%, which means the school accepts 2 out of 10 applications. The impressive number of Oxford University acceptance rates reflects the fierce competition that one must face in order to earn a spot in the university’s program of choice. According to official University data, the number of applications climbed by 26,914 in 2018 and continues to rise.

Now that you’re aware of the astounding oxford university acceptance rate, it’s time to pull up your socks and go to work on improving your competitive exam scores. If you’re serious about increasing your chances of being accepted, start studying for examinations like IELTS, GMAT, GRE, SAT exam, and others that are relevant to your program.

In general, Oxford accepts candidates who have a GMAT score of at least 690. Students must achieve at least 160 on the GRE in both the Quantitative and Verbal sections, while the standard SAT and ACT scores are 1470 and 32, respectively.

Oxford is a 150,000-person city in south England, about 90 minutes from London. The Radcliffe Camera, built in the mid-eighteenth century, reflects every English architectural period since the invasion of the Saxons.

Oxford is regarded as the “city of dreaming spires,” a name used by poet Matthew Arnold to describe the University of Oxford buildings’ harmonious beauty. It is mostly a student city, with much of it owned by the university, resulting in student discounts in practically all sectors.

The University of Oxford is made up of more than 30 colleges. Students normally have their tutorials at colleges, which are intellectual communities. Each features its own dining hall, bar, common room, and library, as well as a diverse range of college clubs and societies. Learn more about Colleges in Oxford University here.

Philosophy & Theology: This course will teach you how to critically analyze and reason about religion. The University of Oxford’s philosophy department is one of the largest in the world, and combining it with religion creates a wonderful subject to study.

Modern Languages: A major in modern languages will enable you to write and talk in another European language while also allowing you to explore a wide range of literature. Since 1724, Oxford has taught modern languages, and it has one of the largest student bodies in the UK, with over 250 students enrolling each year.

Geography: Geography as a major will provide you with important insight into climate change, the economy, global disparities, and culture. It’s a topic that appears to bridge the social and environmental sciences divide. The geography students get access to some of the top facilities in the country.

English Language and Literature: Oxford is the place to go if you want to major in English language and literature. It offers one of the most comprehensive programs in the country, allowing you to learn practically any form of writing you can imagine.

Human Sciences: Of course, Oxford isn’t just fantastic for arts and humanities disciplines; it also offers a truly outstanding human science degree. You can study the social, cultural, and biological elements of human life using this as a starting point, which is a welcome break from traditional studies.

History: Could you think of a better setting to study history than a university and a city rich in it? While it provides a general overview of history, it also focuses on smaller groups, time periods, and specific issues.

Fine Arts: All those artistic students don’t have to miss out on the Oxford magic. Fine art majors are able to find their potential, use their imagination, and follow their creative minds’ desires.

Chemistry: Chemistry is another area where Oxford excels. A major in this atomic-focused subject would undoubtedly prepare you for life after college. Oxford offers one of the best chemistry departments in the world, with cutting-edge laboratories and international research.

Music: We have music on the other end of the spectrum. It’s not just about playing instruments; it’s also about listening, reading, composing, and performing. Majoring in music may provide you with the extra push you require to begin pursuing your goals.

Oriental Studies: A one-of-a-kind, fascinating, and unusual subject that goes beyond the conventional humanities topics. These courses include a wide range of topics, including language, history, philosophy, religion, and social studies. It’s a topic brimming with information. Unsurprisingly, the University of Oxford does not disappoint. It is an excellent place to learn and flourish because of the variety of disciplines to major in, as well as the world-renowned departments and technologies.

Is Oxford Better Than Harvard?

How Can I Get Admission In Oxford University?

Select a course and confirm that you have met or are on track to satisfy the admissions requirements. Explore our colleges and decide whether to use your UCAS form to show a college preference or to submit an open application. Take a look at our admissions timeline and make a note of the due dates.

In your current degree, we want you to be performing at a high 2.1 or first-class level (a US GPA of 3.5-4.0). The university should have stringent admissions requirements and a strong academic reputation.

Can I study In Oxford For Free?

Oxford is committed to ensuring that all students who are offered a place at the university can afford to attend. Few expenditures are paid up front, and UK students can get a lot of financial help from the government, the university, and a student’s institution.

Is It Difficult To Get Into Oxford?

Thousands of students have now received word on whether or not they have been accepted to Oxford University. Getting into the institution is difficult, but not as difficult as many people believe, according to Mike Nicholson, the university’s head of undergraduate admissions, who says that each spot receives an average of five applications.

Is Oxford An Ivy League?

Harvard, Yale, Princeton, Dartmouth, Brown, Cornell, Penn, and Columbia are members of the Ivy League, which is an NCAA sports league. Oxford is not a member of the Ivy League. It is, nonetheless, one of the two best schools in the United Kingdom, the other being Cambridge University.

What’s the Cost Of Living In Oxford?