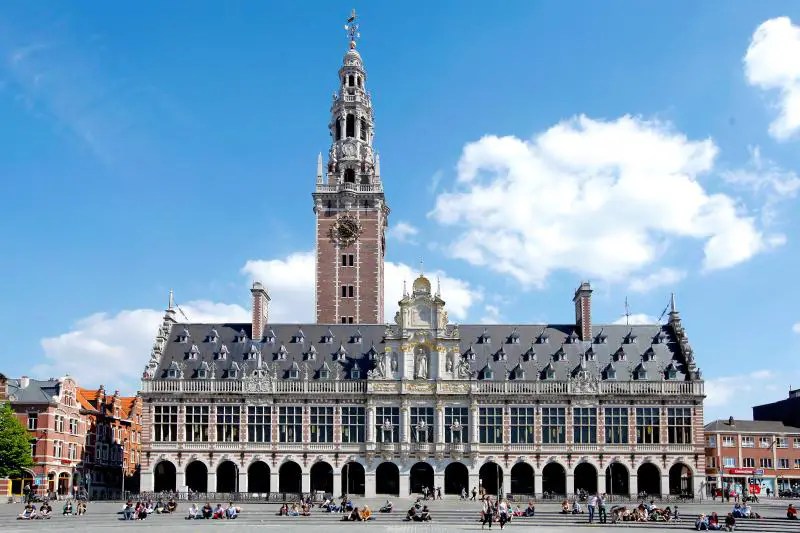 This article will focus on a comprehensive list of universities in Belgium, their tuition fees and many other important information.

Belgium is one of the world’s most cosmopolitan countries, especially as it is divided into three regions, each of which corresponds to one of the three official languages (Dutch, French, and German). Belgium, dubbed the “heart of Europe,” is a center of international cooperation and networking, providing an enriching educational experience.

Belgium is rich in history and has a diverse cultural mix. Many medieval castles and historical attractions, such as the Battle of Waterloo, can be found here.

International students make up almost half of all students enrolled in Belgian universities and colleges, and you’ll benefit from a high-quality education with a strong research focus. Before I provide the list of universities in Belgium, I will us to look at the benefits associated with studying in Belgium.

Benefits Of Studying In Belgium

Here are some of the top reasons many students choose to study in Belgium:

Universities In Belgium are well ranked in Europe

Tuition rates in Belgium vary depending on your nationality, the region where you study, the type of university, the academic degree you choose, and so on. Keep in mind that the tuition policy is reasonable, and colleges provide scholarships and grants.

International students should expect to pay between 800 and 9,000 EUR per academic year on average. Fees are generally lower for EU/EEA students.

A considerable number of Belgians speak English in addition to the three official languages of Dutch, German, and French. So, if you want to become a polyglot or simply learn the basics of as many languages as possible, studying in Belgium is a must.

During your time as a student, you can explore a variety of historic structures and locations. The Grand Palace, the Atomium, the Ardennes, the medieval tower Belfry of Bruges, the Mini-Europe miniature park, Gravensteen — the 10th century fortress, the Royal Palace of Brussels, the Flanders battlefields, and so on are just a few examples.

So these are some of the many benefits associated with studying in Belgium. Let’s now look a the full list of universities in Belgium.

Here is a list of universities in Belgium. If you want to study in any of the universities, kindly contact the university and get more information about their programs, fees, application etc.

It has satellite campuses in Kortrijk, Antwerp, Ghent, Bruges, Ostend, Geel, Diepenbeek, Aalst, Sint-Katelijne-Waver, and Belgium’s capital Brussels, in addition to its main campus in Leuven. KU Leuven is Belgium’s and the Low Countries’ largest university. More than 58,000 students were enrolled in 2017–18. Although various programs, particularly graduate degrees, are offered in English, the predominant language of instruction is Dutch.

Major ranking tables consistently place KU Leuven among the top 100 universities in the world. In the Times Higher Education rankings for 2021, it is ranked 45th, 70th in the QS World University Rankings, and 97th in the Shanghai Academic Ranking of World Universities. Since 2016, Thomson Reuters has placed KU Leuven as Europe’s most innovative institution, with its researchers filing more patents than any other university in Europe, and its patents being the most referenced by external academics.

Despite its Catholic roots, KU Leuven is run independently of the Church. KU Leuven welcomes students of all faiths and life perspectives.

Ghent University is a Belgian public research university in Ghent. It was founded by King William I of the Netherlands in 1817. Following the 1830 Belgian revolution, the university was taken over by the newly constituted Belgian state. The institution became the first Dutch-speaking university in Belgium in 1930, despite the fact that French had previously been the standard academic language at what was then known as Université de Gand. It received considerable autonomy in 1991 and changed its name from State University of Ghent to its current name.

Gent University, unlike the Catholic Institution of Leuven or the Free University of Brussels, regards itself as a pluralist university in the sense that it is not affiliated with any religion or political philosophy. The coat of arms’ motto, Inter Utrumque (‘In Between Both Extremes,’) emphasizes that wisdom and science can only be acquired in a peaceful environment, with the king and fatherland completely supporting the institution.

The University of Liège is a large public university in Liège, Wallonia, Belgium, that is part of the French Community of Belgium. French is the official language of the country. According to Times Higher Education, ULiège is placed 301–350 in the world in 2020, 451st in the QS World University Rankings, and between 201 and 300th in the Academic Ranking of World Universities. More than 2000 employees, including academics, scientists, and technicians, are working on a wide range of topics, from basic to applied research.

The principality’s influence drew students and notable scientists and philosophers, such as Petrarch, to study in its libraries beginning in the eleventh century. The city gained a reputation as a new Athens due to the prestige of its medieval schools.

Hasselt University is a forward-thinking institution with a strong international focus. It stands for academic quality, cutting-edge research, and a strong dedication to innovation and entrepreneurship. This is evident in its U-Multirank 2019 rating among the top 10% of universities worldwide. The overarching goal is to achieve academic brilliance while also being economically and socially relevant. Hasselt University has a large worldwide network and participates in numerous international research and education programs.

Is Belgium good for international students?

Is living in Belgium expensive?

Can I stay back in Belgium after my studies?

You can no longer stay in Belgium once you have graduated and your legal stay as a non-EEA student has expired, unless you have secured a different residence permit, based on another legal reason for staying in Belgium, before the expiration date of your student residency.

Can one work and study in Belgium?

Is it easy to get job in Belgium?