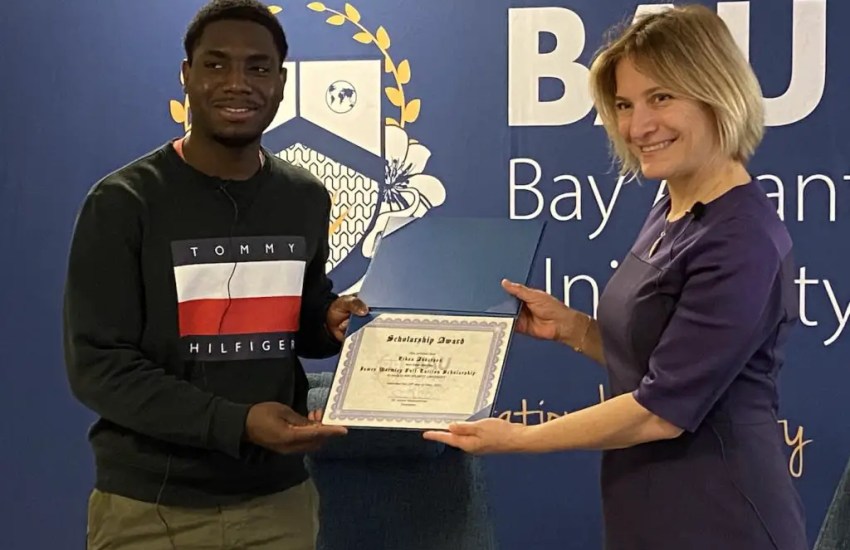 In our article today, we are going to consider Bay Atlantic University, it’s tuition fees, requirements and many other important information you will like to know about this university.  Bay Atlantic University (BAU) is a Washington, DC-based private, non-profit university. Their campus, which is only a short walk from the White House, provides a comfortable and serene learning environment.

Bachelor’s, master’s, and certificate programs are available at the university. Economics and finance, accounting, business administration and management, and international affairs are among the subjects included in their degrees. BAU’s undergraduate and graduate programs are taught by a world-class faculty of scholars and practitioners who are leaders in their professions.

Bay Atlantic is part of the BAU Global Network, which consists of nine campuses strategically located across the globe. Istanbul, Berlin, Cyprus, Batumi, Plymouth, Hanoi, Puebla, and Xi’an are among them.

BAU has a strong international student body, with the majority of students being from outside of North America. Although the University does not have its own on-campus housing, it does have ties with local residences and can assist you in finding and obtaining student housing.

Photography club, student government association, club soccer, and club rugby are just a few of the clubs and societies available at BAU. They also offer a variety of student support programs that can assist you with health, academic, and career concerns during your time at BAU.

Bay Atlantic University is committed to assisting students in making sound financial decisions. As a result, they adhere to a Guaranteed Tuition policy, which states that whatever the tuition is when you enroll for classes, it will remain constant for the duration of your anticipated time of study (defined as two years for master’s students and four years for bachelor’s degree students).

These scholarships are awarded to applicants who submit legitimate SAT, GMAT, or GRE scores along with their applications. Tuition discounts range from 25% to 100% off.

Bay Atlantic University is located in Washington and here’s the address: 1510 H St NW, Washington, DC 20005. When it comes to culture, Washington has first-rate facilities, as well as a diversified dining and nightlife scene. The Shenandoah Valley’s gorgeous fauna and the Chesapeake Bay are only a short drive from the city, making them ideal for students who wish to experience the great outdoors.

The admission process at Bay Atlantic University is very easy. The school accept online application. So all you have to do is gather all the required documents, create an online account on their portal and submit your application. Once you’ve submitted, the university admission department will go through it and get back to you as soon as possible.

Let’s now look at other top universities in Washington you can consider if BAU isn’t good for you.

The University of Washington was established in 1861 as a public institution. It has a total undergraduate enrollment of 35,582 students (fall 2020), is located in an urban area, and covers 634 acres. The academic calendar is based on quarters. The University of Washington is ranked #59 in National Universities in the Best Colleges 2022 edition. Tuition and costs for in-state students are $12,076; tuition and fees for out-of-state students are $39,906.

The University of Washington, located north of downtown Seattle, is one of the West Coast’s oldest public universities. It’s also a cutting-edge research school that receives considerable federal funding each year and hosts an annual undergraduate research conference where students can present their findings to the public. The university’s School of Medicine, College of Engineering, and Michael G. Foster School of Business are all highly regarded. The university, which is known as a commuter school, does not require freshmen to live on campus, but it does encourage those who do to conserve energy and recycle.

Gonzaga University was founded in 1887 and is a private university. It has a total undergraduate enrollment of 4,852 students (fall 2020), is located in a city, and covers 152 acres. The academic calendar is semester-based. Gonzaga University is ranked #79 in National Universities in the Best Colleges 2022 edition. The total cost of tuition and fees is $48,470.

Gonzaga University is a Roman Catholic private university that welcomes students of all religions. It’s less than half a mile to downtown Spokane, Wash., if you live near the Spokane River. There are over 95 active groups on campus for students to select from. At Gonzaga, intramural sports are extremely popular, with more than 60% of the student body playing. Gonzaga University is a member of the NCAA Division I West Coast Conference. The men’s basketball team is the university’s pride and joy, and they’ve reciprocated by winning more than 90% of their games at the school’s McCarthey Athletic Center.

Seattle University was established in 1891 as a private institution. It has a total undergraduate enrollment of 4,299 students (fall 2020), is located in an urban area, and covers 50 acres. The academic calendar is based on quarters. Seattle University is ranked #127 in National Universities in the Best Colleges 2022 edition. The total cost of tuition and fees is $49,335.

Seattle University is a Jesuit university that is located in the city’s First Hill and Capitol Hill areas. Undergraduate students must reside in dorms for the first two years of their studies and can pick from over 60 majors. More than 30 graduate programs are available in Seattle, including those at The Albers School of Business & Economics and the School of Law, which is well-known for its legal writing program. Seattle University has four chapels and other “sacred places” on campus, which are peaceful areas where students can reflect as a faith-based institution.

Two-thirds of students participate in volunteer work, with some participating in the Children’s Literacy Project, which places tutors in Seattle schools. Students can also join groups, participate in intramural sports, or participate in intercollegiate athletics. The Seattle Redhawks are divided into 15 NCAA Division I teams that compete in several conferences. Jim Whittaker, the first American to reach the peak of Mount Everest, is a notable alumni.

Seattle Pacific University was established in 1891 as a private college. It has a total undergraduate enrollment of 2,702 students (fall 2020), is located in an urban area, and covers 44 acres. The academic calendar is based on quarters. In the 2022 edition of Best Colleges, Seattle Pacific University is ranked #227 in National Universities. The total cost of tuition and fees is $35,646.

Seattle Pacific University (SPU) is a private Christian university in Seattle’s Queen Anne area, about 10 minutes from the city center. Graduate students can receive master’s degrees in around 15 programs, including those in the schools of business and education, while undergraduates can pick from more than 60 academic areas. Many Seattle Pacific students and graduates take advantage of the Center for Career and Calling’s offerings, which include help with cover letters and portfolios, among other things.

Through the John Perkins Center, SPU students can participate in over 50 clubs and a vast network of service activities. Intramural sports are available, or students can try out for the maroon and white Seattle Pacific University Falcons, who compete in the NCAA Division II Great Northwest Athletic Conference. Doris Heritage, a distance runner who won five world championships before coaching the Seattle Pacific women’s cross country team for nearly 40 years, is a notable alumni.

Whitman College is a private college that was established in 1883. It boasts a total undergraduate enrolment of 1,360 students (fall 2020), a rural environment, and a 117-acre campus. The academic calendar is semester-based. Whitman College is ranked #38 in National Liberal Arts Colleges in the Best Colleges 2022 edition. The total cost of tuition and fees is $55,982.

At Whitman College, a liberal arts college in the remote little town of Walla Walla, Washington, campus activities constitute a large aspect of student life. Intramural sports (70 percent of students participate on a team) and Greek life attract a large number of students. Despite the fact that the institution only has a few sororities and fraternities, the Greek system is home to nearly a third of the student body. Around 20% of students participate on the Whit varsity sports teams, which are all NCAA Division III Northwest Conference members. If Greek life or sports aren’t your thing, there are over a hundred different student groups and organizations to join.

Students can climb for enjoyment or for course credit at the campus’s indoor rock climbing facilities. Outdoor enthusiasts can also earn academic credits by enrolling in unusual courses like glacier mountaineering, kayaking, and wilderness skills. The student Outdoor Program also organizes recreational outings for pure pleasure, such as moonlight sea kayaking and whitewater rafting. Whitman students can also take advantage of the school’s western setting by enrolling in the Semester in the West program, a three-month trek aboard a converted horse trailer across Oregon, Nevada, California, Utah, and Idaho.

Whitworth University was established in 1890 as a private institution. It boasts a total undergraduate enrollment of 2,368 students (fall 2020), a suburban environment, and a campus that is 200 acres in size. It follows a four-year academic calendar. Whitworth University is ranked #4 in Regional Universities West in the Best Colleges 2022 edition. The total cost of tuition and fees is $47,590.

Saint Martin’s University was established in 1895 as a private institution. It has a total undergraduate enrollment of 1,394 students (fall 2020), a suburban environment, and a 300-acre campus. The academic calendar is semester-based. In the 2022 edition of Best Colleges, Saint Martin’s University is ranked #35 in Regional Universities West. The total cost of tuition and fees is $40,690.

Hope you enjoyed reading this article on Bay Atlantic University and other universities in Washington. You can contact the schools through the link provided and get more information about their programs requirements etc.